The last word in luxury, and it’s redefining coach travel :
12-day Journey concentrating on the Western Regions with Crystal Cruiser. 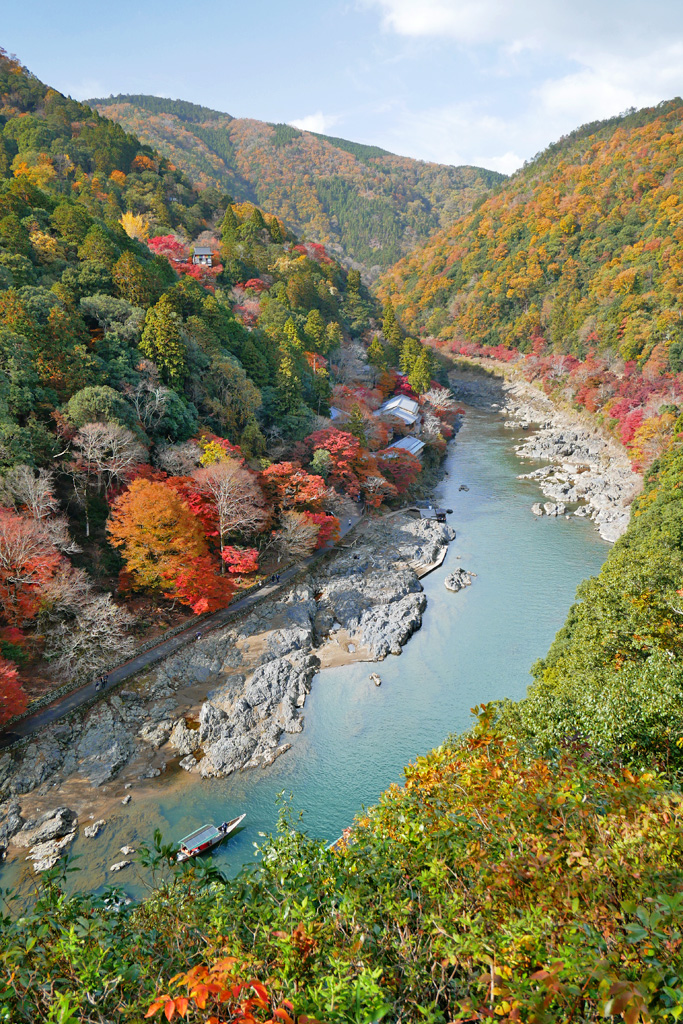 Your journey across western Japan will begin at Shin-Osaka station.

Accompanied by an English-speaking attendant, you will head towards Arashiyama in Kyoto, the former capital of Japan, where the appearance of the famed Togetsukyo Bridge changes with the seasons. The coach will then take you to Monjusou, a traditional spa hotel at the Amanohashidate hot spring. Behind the hotel lies Amanohashidate itself, one of the three most famous scenic spots in Japan, and the inspiration behind many notable haiku. Its unusual topography sees 8,000 pine trees of various sizes adorn a 3.6km sandbar beach, making it a real pleasure for all visitors.

After breakfast at the hotel, you will leave Amanohashidate for the Ine-no-Funaya boat houses. A funaya is a peculiar construction that houses boats on the ground floor so they can directly enter the sea, with living quarters on the first floor. You can still see 230 of them here, helping maintain the image of old Japan.

Afterwards, you will visit Kyogamisaki, a cape featuring one of the three major lighthouses of Japan, before heading toward Genbudo. A cave known across the land for its incredible geomagnetic reversal phenomenon, Genbudo is made of basalt from an eruption which took place 1.6 million years ago. It’s truly worth the trip.

The last destination on this second day is the hot spring of Kinosaki, which itself has a proud history going back some 1,300 years. Depending on the season, you may see many guests in traditional yukata garb along the river.

After breakfast at the hotel, your private coach will take you to Jinpukaku. The home of Emperor Taisho, this historical monument is one of the Important Cultural Properties of Japan.

Afterwards, there will be a Yurin Gozen meal for lunch at Yurinso, a restaurant that’s built more like a work of art based on the traditional architecture of shrines and temples, and where the furnishings have carefully been selected.

After lunch, you will enjoy the Tottori sand dunes and see the yohaijo (worship space) in the Nageiredo Hall at Sanbutsuji Temple, before heading to Mansuirou, a hot-spring inn in Misasa, to relax on your own after a long day.

The fourth day will begin with a visit to Adachi Museum of Art. The museum’s celebrated 165,000m² garden has been ranked as the best in the country for 16 consecutive years by The Journal of Japanese Gardening, an American magazine dedicated to exquisite Japanese gardens.

After lunch, you will visit Izumo Grand Shrine, one of the national treasures of Japan. Built in 1744, it is a testament to the oldest style of shrine architecture in the country. This night there’s a leisurely stay at Keiun, a traditional inn harking back to earlier times.

Then, after visiting a boat shed with a long history, you will head toward Shoka Sonjuku, Japan’s most famous private school, where many key figures who led Japan between the late Edo period and the Meiji period studied. You will spend the night at Tomoe, a historic hotel in the ancient city of Hagi, in a Japanese-style room for a memorable night.

Your sixth day is all yours at the hot spring of Hagi Onsen.

Hagi has a unique character, and has kept its appearance as an ancient castle town – to the extent that some people describe it as a museum without a roof. We recommend you enjoy a slow walk across this beautiful city to discover all its secrets, from the ruins of Hagi Castle itself to the traditional Machiya samurai residences, via the old residences of Ishin activists, the temples and the shrines. Traces of history are everywhere.

In the morning, the coach leaves for Motonosumi Shrine and its 123 red torii gates. These are aligned on an incline of around 100 meters, and the view is breathtaking. There’s another incredible view in store after that, from the great Tsunoshima Bridge across the azure-blue sea, before a Sankai-no-Megumi Gozen – a meal “with fruits of the land and the sea” – at Hotel Nishinagato Resort.

Then you’ll visit the Akama Shrine in Shimonoseki, dedicated to Emperor Antoku, who committed suicide by drowning at the age of eight after losing the Genpei War.

The party will then pass through the undersea Kannon Pedestrian Tunnel, walking from the island of Honshu to Kyushu, to reach the Mojiko retro district, which once prospered as an international trading port, and which is now a pretty sightseeing spot.

After breakfast, you will head toward the blue tunnel at Aonodomon, hand-carved by the Buddhist monk Osho Zenkai.

During the Edo era, the level of the river rose after a major dam was built, forcing passers-by to take a dangerous route holding onto an iron chain on the quay wall as a lifeline. After too many people and horses lost their lives on this deadly path, a monk spent the next 30 years carving out a tunnel using just a hammer and chisel.

Then it’s on to see the Shin Yabakei gorge, before heading toward the hot spring at Kurokawa Onsen. This particular onsen has numerous special qualities, and has been awarded an unprecedented two stars as a hot spring by the Michelin Green Guide Japan.

After breakfast, your coach will take you to Aso Kusasenri, one of the five mountains of Aso. This grand prairie covers 785,000 square meters in a crater at the north edge of Mount Eboshi. Its lake formed slowly by accumulating rain water, and landscape gives rise to a beautiful natural contrast. It’s perfect for a lovely long walk.

The next visit is to Kumamoto Castle, one of the three great castles of Japan. It was damaged by the recent earthquake and is currently under repair, so unfortunately the interior is not open to visitors, but you will still be able to see its tower and turret from nearby.

This night sees a visit to the Hitoyoshi Onsen, which is well known for the soft texture of its water and the good it does for your skin!

The first order of day 10 is a visit to the Sengan-En gardens. Sengan-En is a leading example of a “Daimyo Tei-En”, which is to say gardens established by ancient feudal lords. You will also see the daimyo’s house, and its magnificent views overlooking Sakurajima. We have arranged a Tokubetsu Zen, literally a “special meal”, in the Hime-no-Ma – the princess’ parlour, which usually is closed to the public.

After lunch, your private coach will take you to Lake Ikeda, the largest caldera lake on Kyushu, which is 15km around and has a depth of 233m. It has rich, clear indigo waters, and provides a sensational view of Mount Kaimon – a stately peak known as the Fuji of Satsuma.

You will then go to Ibusuki, renowned for its sand baths, and will finish the day with a good night’s rest at Ibusuki Hakusuikan.

After leaving the hotel, you will visit the Chiran Peace Museum, a monument to the calamities of war and the preciousness of peace and life.

After lunch, it’s time for sightseeing in Sakurajima, while at the Arimura Lava Observatory, you can experience the peculiar atmosphere created by the lava field that flows from the crater and the wild black pines growing nearby.

Then it’s all aboard for the Sunflower Satsuma, a cruise ship with all the latest equipment, so you can spend your last day of your journey across western Japan in a luxurious suite on a one-night cruise toward Osaka.

You’ll dock at Osaka Nanko, the south port of Osaka, and meet the coach which will take you to Nara, one of the most ancient sites in Japan. The Kasugataisha Shrine stands on part of this old town’s sprawling parkland, and Nara’s many deer are venerated here as messengers of the gods. Protected as natural and holy monuments, they roam the grounds and are very friendly.

Your last meal will be held at the restaurant on the top floor of Osaka Marriott Miyako Hotel, and with full stomachs, you will head toward Shin-Osaka station, the last stop on this wonderful journey.

PLEASE ASK A MEMBER OF STAFF

Whether you have an enquiry or would like to send us some feedback, we'd be delighted to hear from you by phone, email and contact form below. We, Hankyu Travel International Europe UK Ltd, is a destination management company which exclusively provides services to travel agencies, so please note that we do not provide our services to private customers.